Golf Gems Along the Oregon Coast

Golf is Better Together with Deuce Premium

Celebs Return to Lake Tahoe for American Century this Summer

If the drives off the tee during your rounds of golf are half as pretty as the Oregon coastline as you cruise south down US Highway 101 to get to those courses, you are in for a heckuva holiday.

Every season has its own charms and as you drift over to the water’s edge from Portland and head on down to the southwest part of the state, you’ll experience 363 miles of rugged cliffs, sandy beaches, lavish botanical gardens and fern-laden evergreen forests on a journey that include such bonuses as migrating gray whales, storm watching, old lighthouses, wind-sculpted sand dunes that can reach 500 feet above sea level, observe wet-suited surfers navigate waves and sea lions as well as enthusiasts doing their clamming, crabbing and fishing and serious kite fliers taking advantage of the ocean “breezes”.

The latter is also something the golfer can do as wind plays a definitive factor with the sea-front courses. 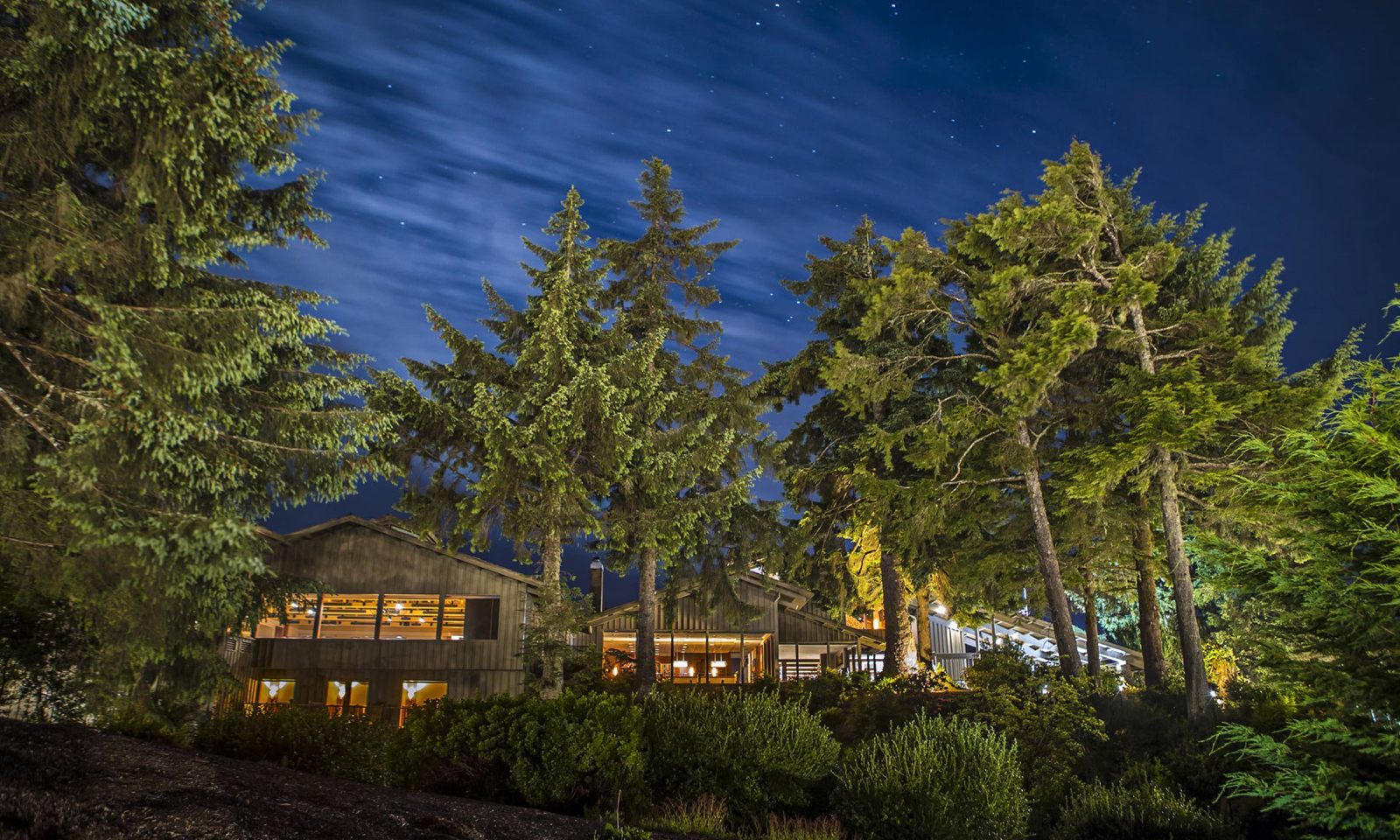 The first stop is the Salishan Coastal Lodge, near Lincoln City and located in what is called the unofficial end of the North Coast.

“We’ve been operating for 56 years and we like to be known as the one stop as players fly into Portland and stop to play here on their way down and/or way back up to Bandon Dunes,” said Tom Graves, Director of Golf & Memberships at Salishan Golf Links in Oregon.

Graves, a native who grew up on the course and began as a cart attendant, went off to college in nearby Salem to get his business degree, played for the golf team, then coached the men’s and women’s teams before eventually returning here to be the club pro, tells a little history about the course.

“(It) originally opened in 1965 as a 9-hole course. Our current back nine was the original nine. In 2003-4 the 18 was redesigned by Peter Jacobsen. He changed some of the fairways and made it more playable. Hole 15, our signature par 3, used to be an uphill, now the tee boxes are elevated and you shoot down.” 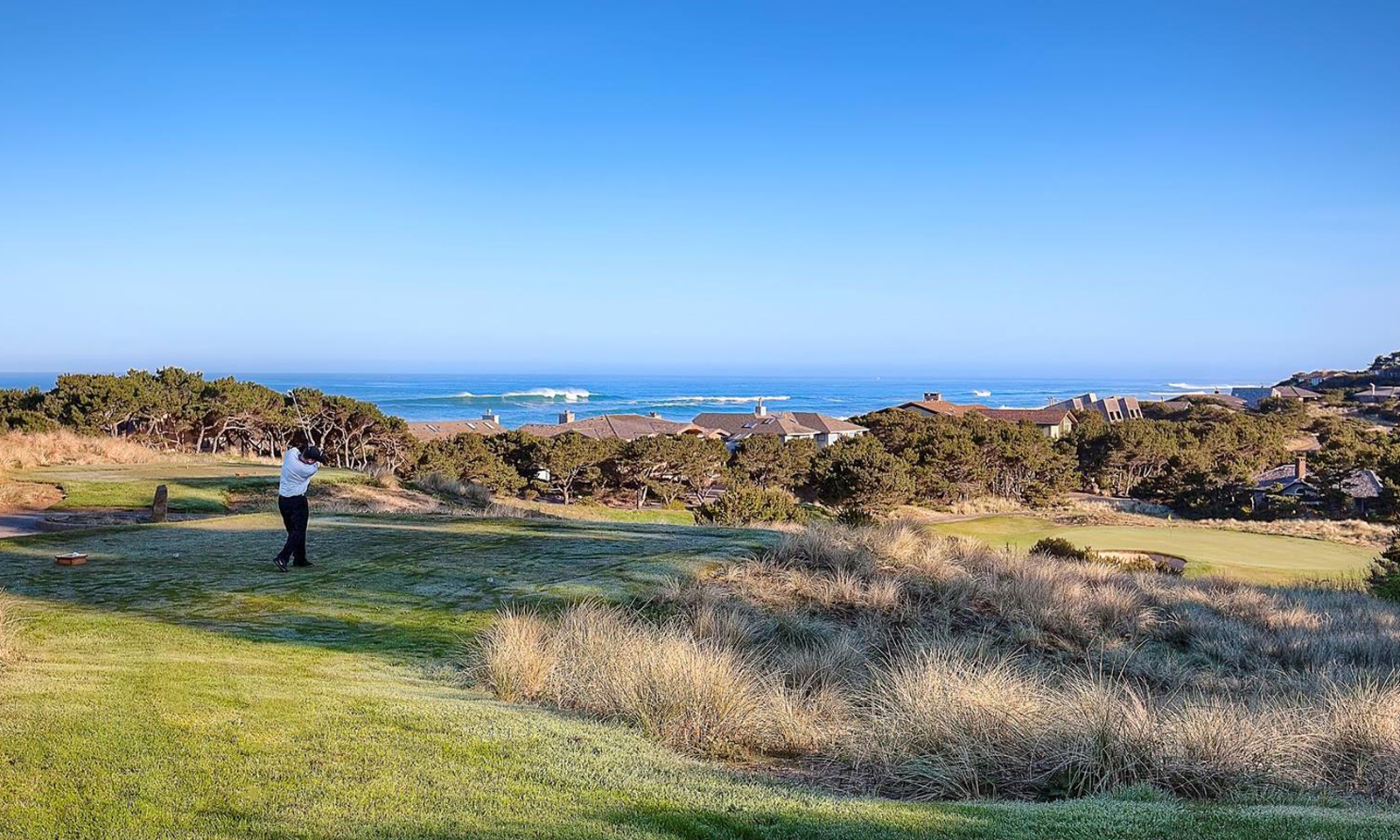 Playing primarily off bent grass, the Par 71 championship course has four sets of tees from 5800 to nearly 6500 yards.

“It plays longer because most courses are par 72, but ours is 71 and with the wind and coastal air it really plays longer than the 6500 on the scorecard,” said Graves.

“We have two quite different nines,” continues the young golf executive. “The front is tree-lined and in my opinion the harder of the two nines especially that stretch of 6-7-8-9 which are pretty tough. The back nine is more risk/reward. Only one par five, but quite reachable in two. Sixteen is almost a driveable par four. Seventeen IS a driveable par four. So going down the stretch, the final three holes can make or break your round. A good finishing stretch for sure.”

For sure is that when you’re done with the clubs for the day, you will have access to a great swimming pool and fitness facilities (as well as a fun and unique aerial adventure park that tests strength and balance of all family members) then you can refuel and reenergize with fine dining and a top-of-the-line spa on the premises. 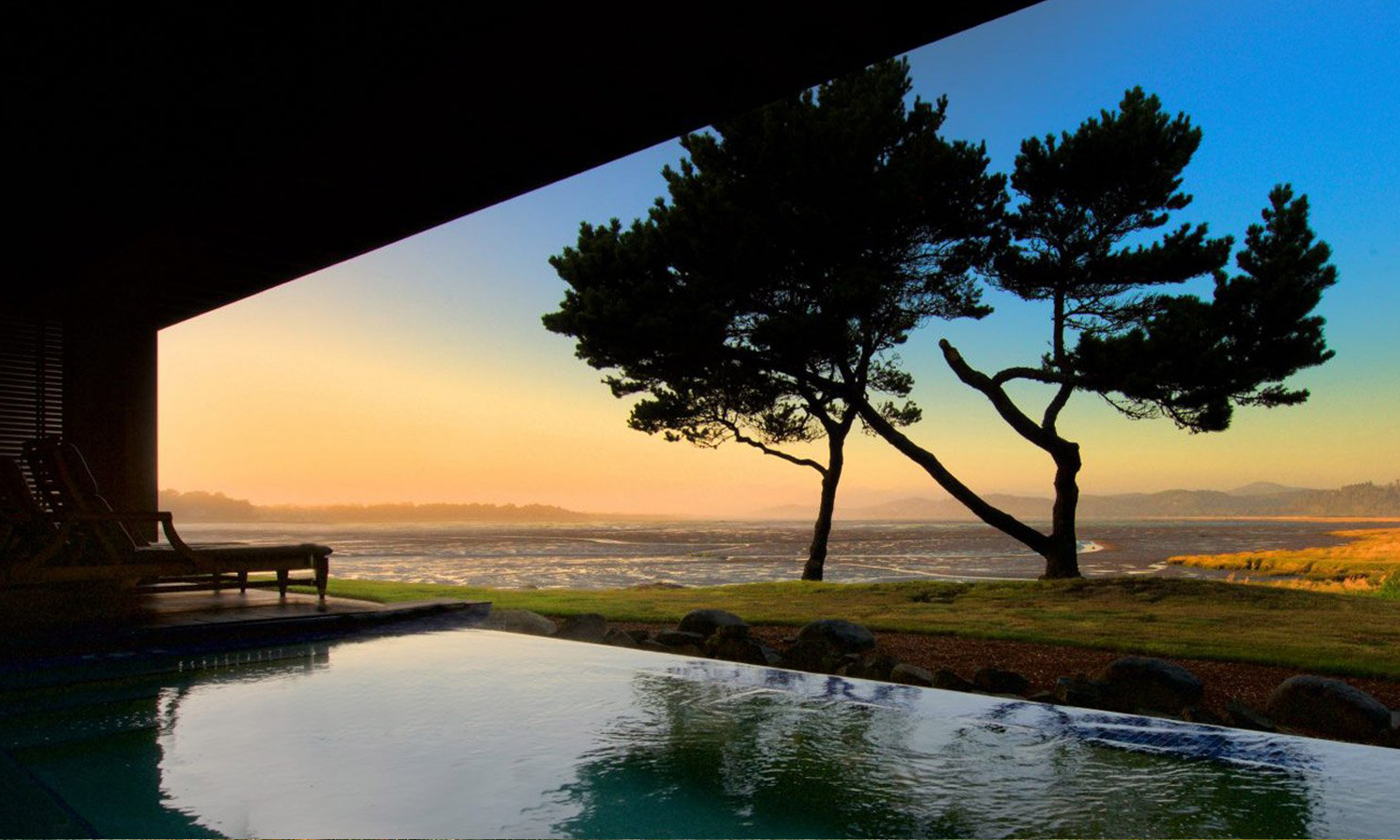 Experienced with years of dealing with the sport-specific aches and pains of golfers, spa supervisor Amanda Smith is always on the lookout for new ways to get guests back on the course rejuvenated and ready to go.

“The Himalayan Salt Stone Massage is our newest offering. It’s really good for fatigue and healing. It has more benefits,” explained Smith. “Himalayan salt stones contain 84 trace minerals that are absorbed by your body during this highly healing massage. The warm salt stones bring about grounding and balance throughout the treatment. On top of replenishing minerals, it will also help reduce inflammation by balancing your positive and negative ions, detoxify, nourish and gently exfoliate your skin.”

Rejuvenated and ready to resume your Oregon road trip, the next stop is just over ninety minutes away in Florence where the award-winning Florence Golf Links will fine tune your skills for playing in the wind before heading down to the star attraction of Oregon coastal golf – Bandon Dunes and its newest sensation – Sheep Ranch. 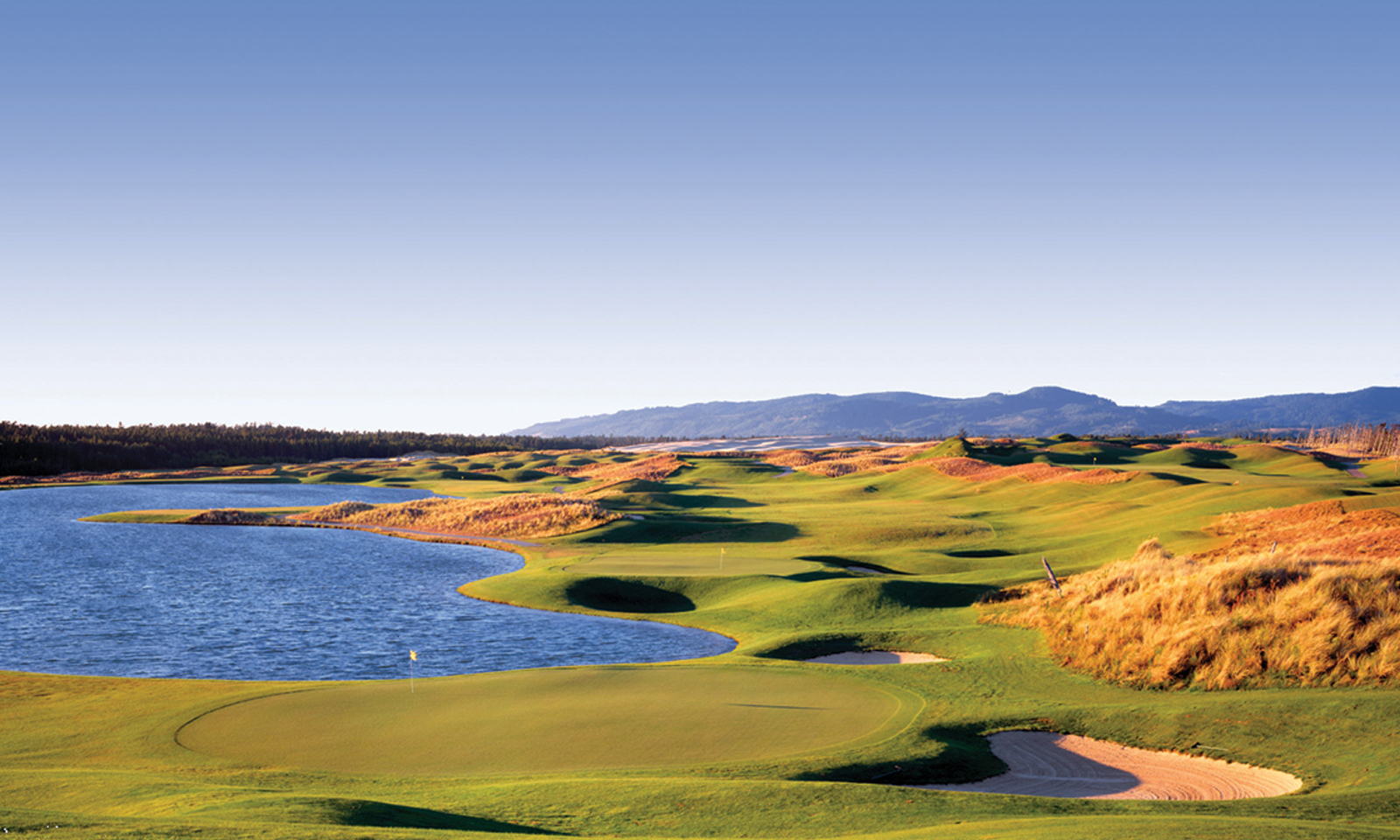 Designed by Rees Jones and situated amidst wind swept sand dunes and towering pine, the par 72, 6,931-yard Florence course is where the inward nine especially, brings you back to the soul of the game with its traditional links style and rolling dunes from tee to green.

Now, driving a couple of picturesque hours further south, perhaps nowhere else in America is the heart and soul of links golf better represented than at Bandon Dunes.

Winner of Golf Digest’s Best New Course of 2020, Sheep Ranch is now the fifth 18-hole course at Oregon’s Bandon Dunes Golf Resort, and is situated on about 140 acres north of the resort’s Old Macdonald course.

Sheep Ranch has unobstructed views of the Pacific Ocean from every hole and at under 6700 yards, it has no sand bunkers and few trees, but it has one almighty defense, one provided by Mother Nature. 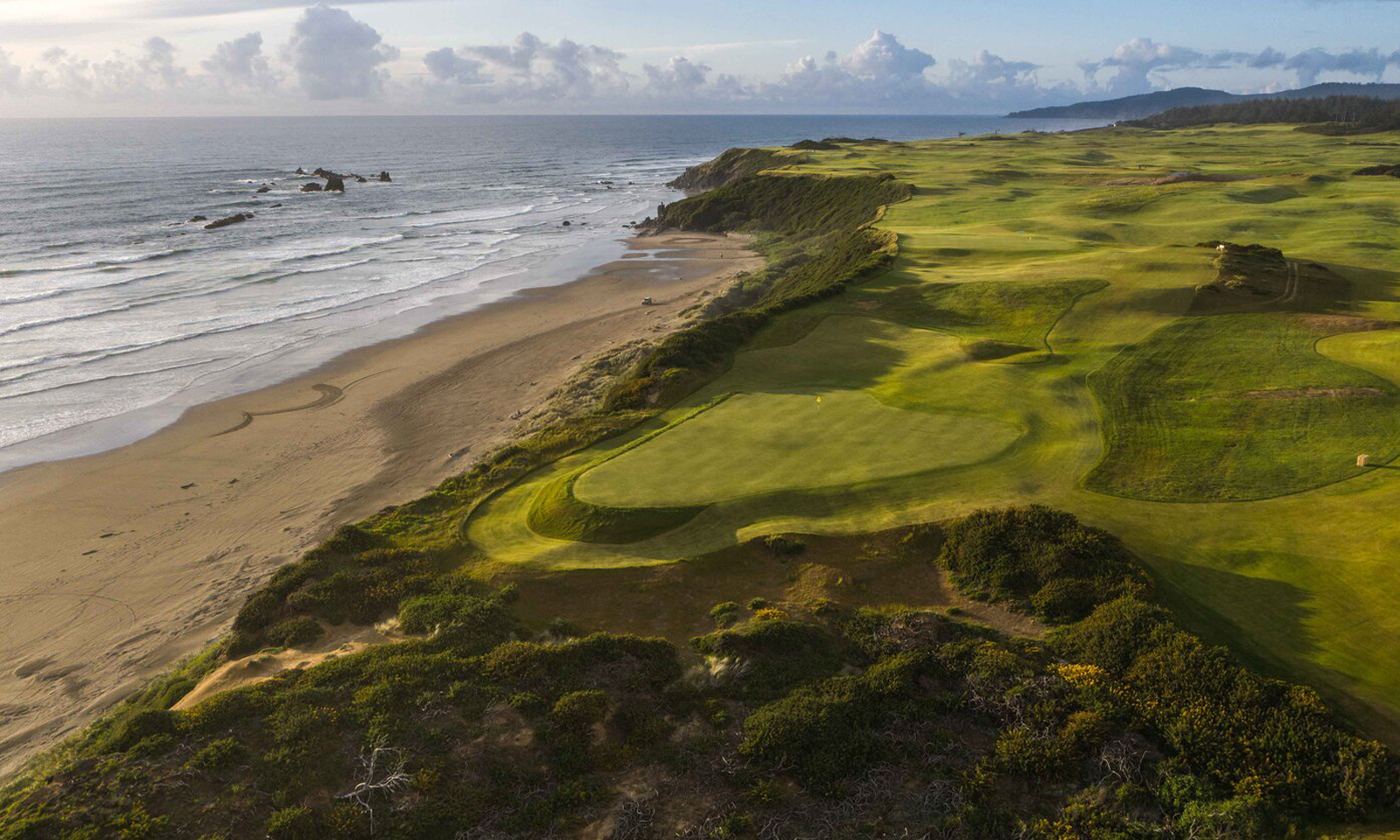 “The main defense is the wind. If it is blowing then Sheep Ranch is going to be tough. If it is not blowing, then it is a gettable golf course, “said Michael Chupka (PGA), the Director of Communications at the Bandon Dunes Golf Resort.

Renovated by the world-class design team of Bill Coore and Ben Crenshaw (who did some routing as they took advantage of the square footage of the coastline and also designed Bandon’s Bandon Trails and The Preserve) and co-founded by Phil Friedmann and Mike Keiser, Sheep Ranch, which officially opened in June 2020, is entirely exposed, its holes spill out across a frontage a mile long. The result is that there are nine greens out on the cliffs. Several of the holes away from the ocean—the fourth, 10th and 14th in particular, are all challenging par 4s.

There’s lots of native grasses mixed in along with poa, but ‘we are all about fescue for links conditions,’ noted Chupka.

While there are “lesser” hazards like the hollows, mounding and grass bunkers, one prevalent component not native to the area but that’s quite abundant here is gorse. This is nasty stuff when you encounter it on a golf course. A prickly, dense shrub that are evergreen and covered in thorns and while they’re flowering, what they do best is gobble up golf balls and dash the scoring hopes of golfers. 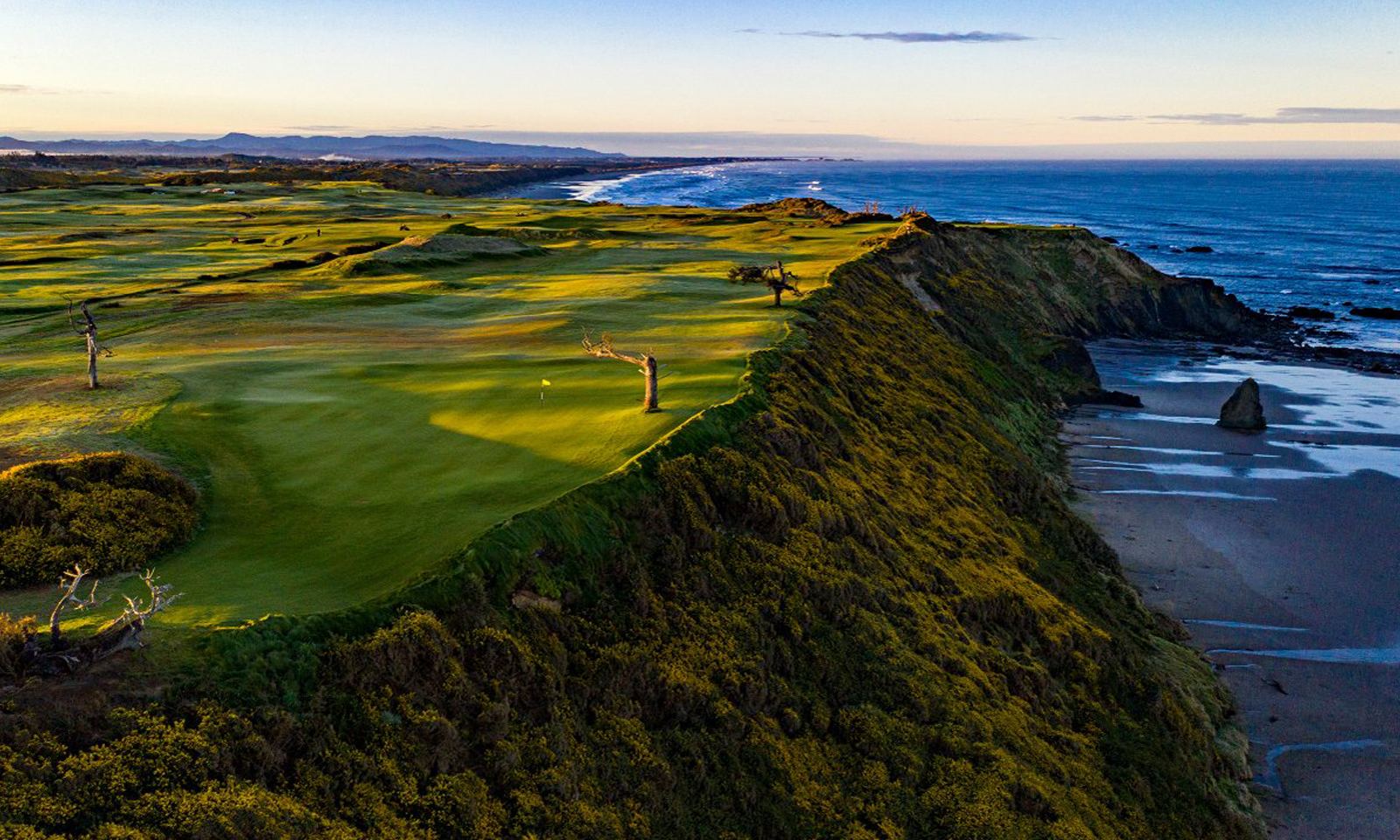 Still, the best way to improve your score at Sheep Ranch is to handle the wind.

“Summertime winds prevail from the north. If you get out early you can escape it for a couple holes, but by early afternoon it is pretty much a sustained 20-25 mph wind. On average June and July are the windiest while it drops down a bit in September and October,” explained Chupka. “During winter as storms approach winds will switch and come from the south. Feels a little warmer and that’s when the storm comes in. Those southerly winds will tend to be more intense as they foreshadow a storm.”

The ability to gauge the wind and watch your tee shot go, literally, over water and over a cliff is exciting. A perfect example is the picturesque but, perilous green of the par-3 16th. Perched on the promontory of Five Mile Point, it is one of the most exposed and windiest places on the Oregon coast. (As Gary, the seasoned starter warned us, our group lost a hat and two club covers to the Pacific when a lingering 40 mph gust hovered over our tee shots and no surprise to subsequently learn that the property was once a wind farm).

What Sheep Ranch does is remind the player that the sport was born on rugged, wind-swept land just like this. Awe inspiring, it is a perfect fit for the sheer natural beauty of the Oregon coast.